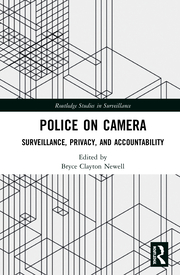 Police body-worn cameras (BWCs) are at the cutting edge of policing. They have sparked important conversations about the proper role and extent of police in society and about balancing security, oversight, accountability, privacy, and surveillance in our modern world. Police on Camera address the conceptual and empirical evidence surrounding the use of BWCs by police officers in societies around the globe, offering a variety of differing opinions from experts in the field.

The book provides the reader with conceptual and empirical analyses of the role and impact of police body-worn cameras in society. These analyses are complimented by invited commentaries designed to open up dialogue and generate debate on these important social issues. The book offers informed, critical commentary to the ongoing debates about the implications that BWCs have for society in various parts of the world, with special attention to issues of police accountability and discretion, privacy, and surveillance.

This book is designed to be accessible to a broad audience, and is targeted at scholars and students of surveillance, law and policy, and the police, as well as policymakers and others interested in how surveillance technologies are impacting our modern world and criminal justice institutions.

Jaap-Henk Hoepman: Privacy is hard and seven other myths (2021)